History of the Brockville Fire Department

The history of the Brockville Fire Department is a long one, extending over 200 years. Firefighters of this department have experienced some major battles throughout the many years. It was in 1886 that the community’s volunteer fire brigade became a professional force, with paid firefighters. The information published here is by no means complete and research continues to take place. If you have factual information regarding the department it would be appreciated if you could pass it along by email so that it can be included.

From early records, it is known that the first recognizable “fire hall” was located in the 1800s in the old town hall with stood at the south west corner of what is now the corner of King Street West and Perth Street.  The building housed town officials, the Fire Department and the Farmer’s Market.  It was a two-story stone building.  In 1860, when the brigade received its second piece of equipment, the market was evicted from the first floor of the town hall and the firefighters moved in.

In 1817, the First Presbyterian church was built on the hill on the northwest corner of William Buell’s cow pasture.  Buell donated the land for the church which still occupies the same site today.  The stone church had a massive steeple bell which had a peal capable of being heard over a wide area.  Hence it was only natural that the townspeople should choose the bell as their fire alarm system.

Whenever a fire broke out in the village, a volunteer would run to the church, ring the bell and summon the bucket brigades.  Householders, who kept buckets at the ready, rushed to the river to form the bucket brigades, passing water pail   by pail to the site of the blaze.  Ironically, when the church itself caught fire one cold winter night in 1847, no alarm was given.

In 1862, when the town hall was demolished and the town fathers moved to Victoria Hall, the present city hall, an Opera House was built on the site and the town built a new fire hall west of the new building.  The new hall included a hose tower for drying hose after a fire.  A hook-and ladder company was formed in 1886, when the department moved into a new “No2” fire hall on the north side of King Street, just east of Garden Street.  From the late 1890’s until 1910, the department used these two fire halls.

The present fire hall at the corner of Perth and James Street West was erected in 1910 at a cost of $11,000.00 and the old No 2 station was torn down. The No 1 station was demolished in the 1930s following a fire at the Opera House. The building became a movie theatre, then was rebuilt as the Civic Auditorium and is now the Brockville Arts Centre.

Through most of the past century, major fires were all too common in Brockville and other communities in the United Counties of Leeds & Grenville.

These fires destroyed landmarks, long established businesses and even resulted in deaths. But fire the destroyer has also cleared away older structures to make way for new development.

A new fire hall was built in the north end of the city on Laurier Blvd. and opened in 1992, with a fire crew now at each fire hall 24 hours a day.  Today, the Brockville Fire Department consists of 39 full time staff and 3 part time. 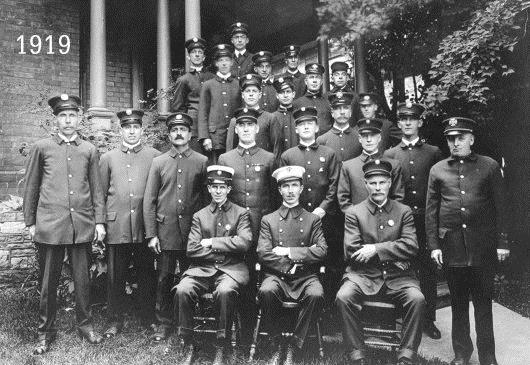 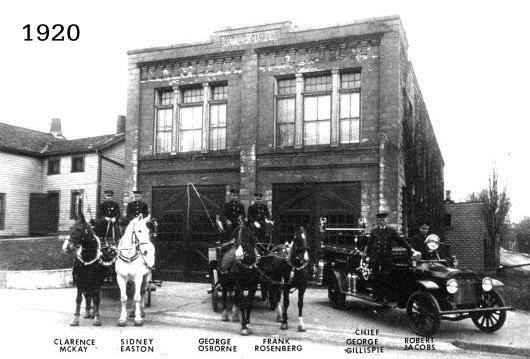 Several members of the Brockville Hook and Ladder Company in 1899. 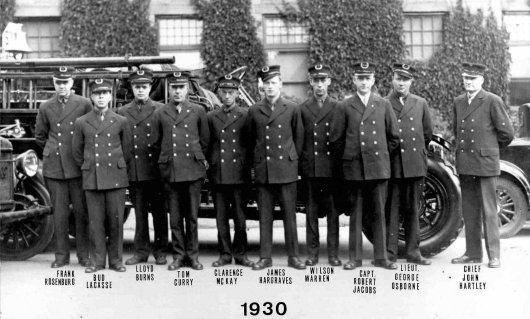 Fire Chief John Hartley and his fire crew in 1930. 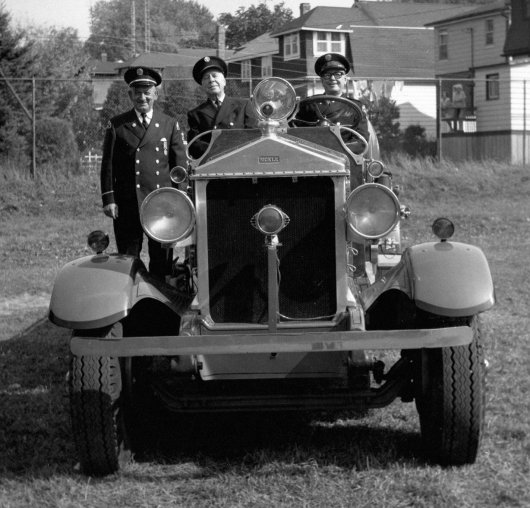